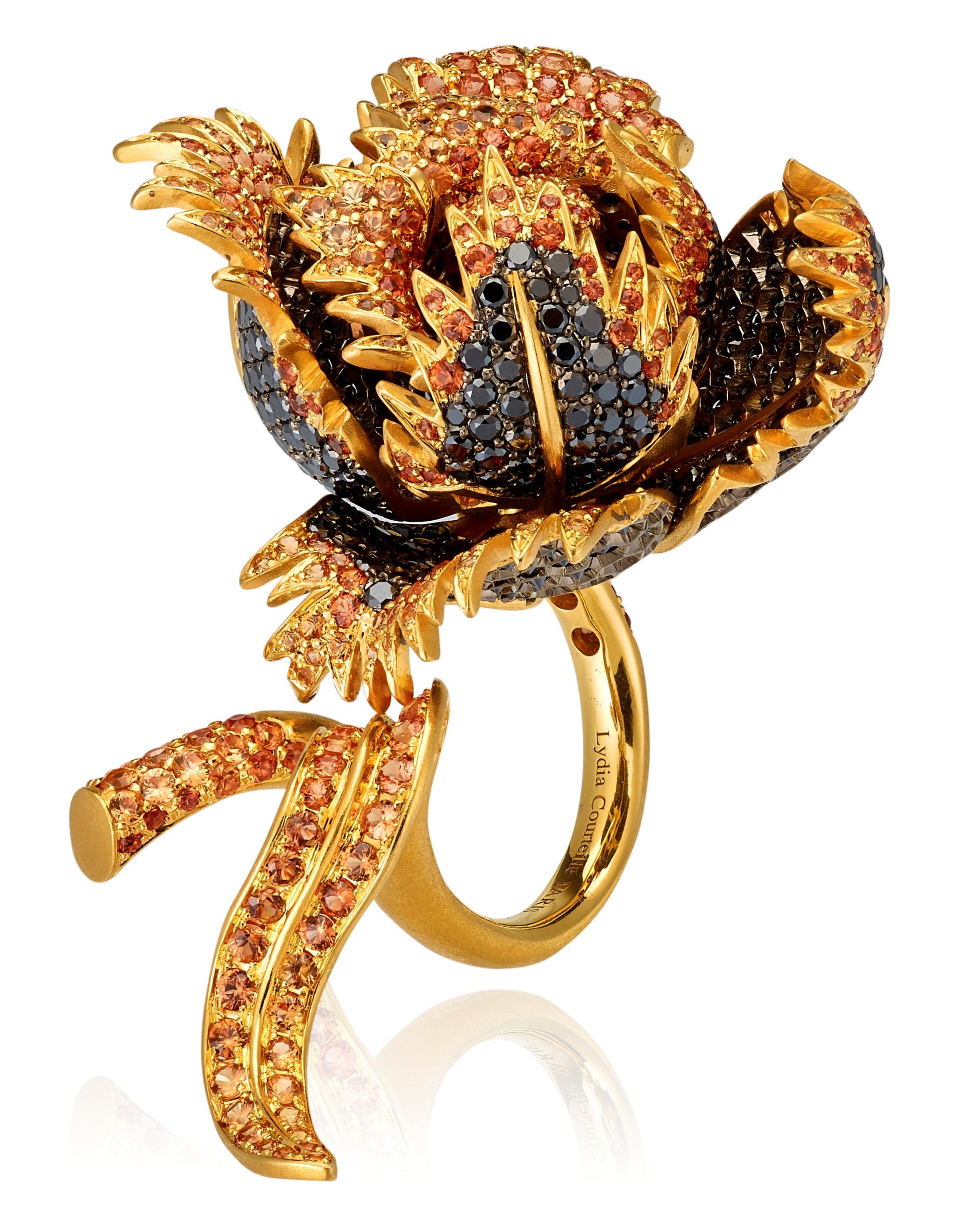 The Caravan Collection was inspired by Lydia's journey to different destinations.  The Peacock is a symbol of Persian monarchy.  The common motif of two peacocks
symmetrically disposed on either side of the Cosmic tree or hom a feature taken from Persia denotes the psychic
duality of man (related to the myth of the Gemini) drawing its life force from the principle of unity. Artifacts-Priceless
masterpieces such as this ring  are museums quality collection jewelry pieces contains a artifacts.

Jember Nasr is a small site south of Baghdad where excavators
discovered a distinctive pottery style from the period immediately after
the Uruk. The Jember Nasr period is recognized as one of artistic splendor .
In contrast to another areas, Jemdet Nasr enjoyed a time of increasing
population, the growth of temple cities , increasing trade and craft
specialization , and, most importantly , the increased use of writing and
cylinder seals Priceless masterpieces such as a ring and a bracelet on the images are
museums quality collection jewelry pieces contains a artifacts. Absolutely magical golden ring inspired by a god with four faces, which may
represent a god of the four winds and a goddess of rainstorms . The god wears a
low cap with a pair of horns meeting above each face. The surrealictical
character is from the Paleobabylonian era. The cult of fire in Persia According to Marco Polo, the baby Jesus gives the Magi a closed box.
On their return to Persia they find a stone inside the box. Unhappy with the present , they throw it into a spring . A flame immediately descends from Heaven towards the spring . From this day the magi worship the sacred fire For centuries Azerbaijan was part of the Silk Road, the network of trading routes connecting Asia and Europe. It was probably merchants who learned about the eternal fires of Surakhany first. Nature is all the time Lydia’s inspiration. Floral jewelry takes the important place in each collection.
The flowers are bisexual or male, very small, as long as or shorter than the bracteoles.
The saxaul is distributed in Middle and Central Asia. Being highly drought resistant, it has played an
important role in the establishment of shelter belts and the fixation of sand dunes as a counter to
desertification. The ring with a secret Aladdin and His Wonderful Lamp brings good luck and good mood. Samarkand became Tamerlan’s capital in 1369. He was protector of arts and letters that made the greatness of Samarkand.  The most of the architecture that he actually built is still visible in samarkand.