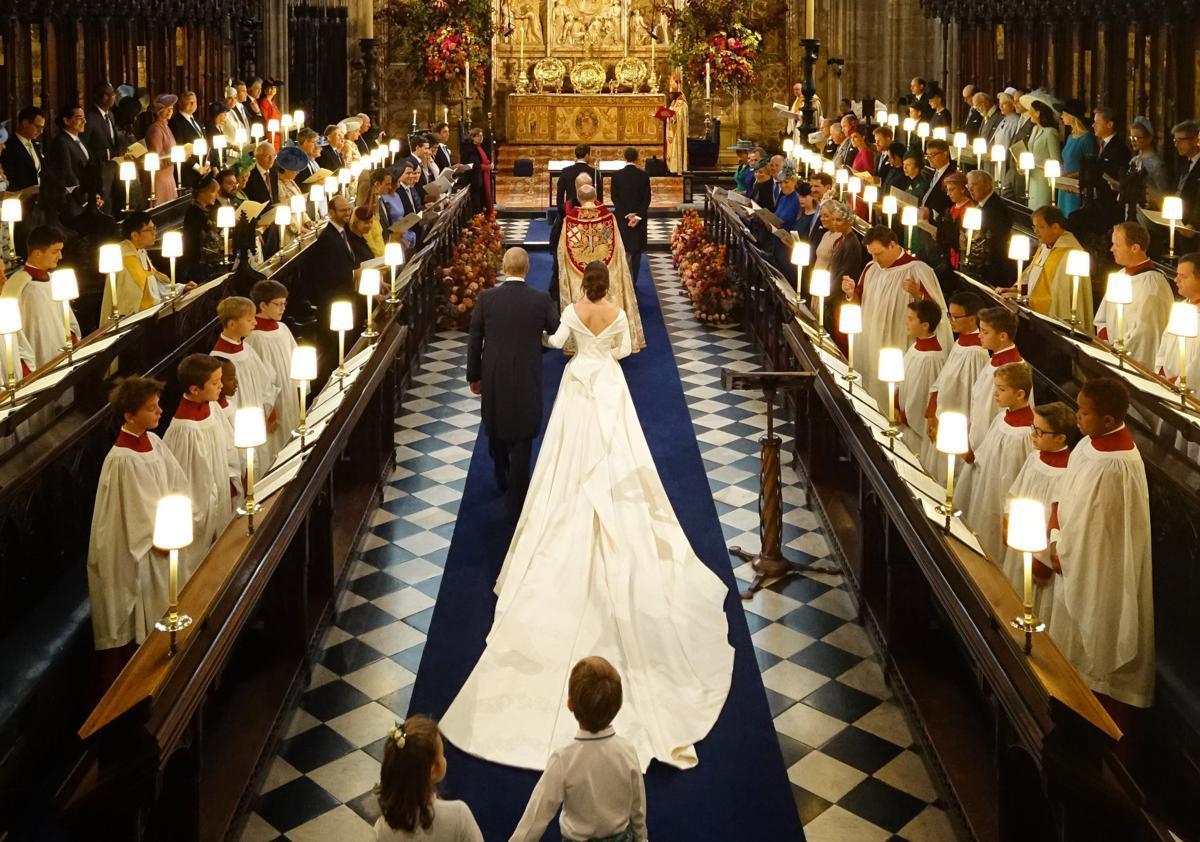 Wedding of Princess Eugenie of York and Mr Jack Brooksbank

Britain's Princess Eugenie of York (center) walked up the aisle to marry Jack Brooksbank during their wedding ceremony in St George's Chapel with a gown designed by Peter Pilotto and Christopher De Vos.
JONATHAN BRADY-pool via AFP/Getty Images

The Archbishop of York, The Most Revd. and Rt. Hon. John Sentamu, has written a personal prayer for the Wedding Service of Princess Eugenie and Mr Brooksbank, which was included in the Order of Service.

The Dean of Windsor, The Rt. Revd. David Conner gave the Address at their Wedding. The Dean also officiated as the couple make their marriage vows.

Musicians from the Royal Philharmonic Orchestra (RPO) performed during the ceremony. The couple have very much enjoyed working together with the RPO’s Managing Director, James Williams, to choose the accompaniment to the Service. The Duke of York is Patron of the RPO.

James Williams said: "It has been a great pleasure to work with HRH Princess Eugenie and Mr Jack Brooksbank to plan the music for their special day and we wish the couple much happiness for their future together." The bridesmaids and page boys, including Princess Charlotte (back left) and Prince George (back right) walked down the aisle following the the wedding of Princess Eugenie of York and Jack Brooksbank in St George’s Chapel at Windsor Castle.
Danny Lawson-Pool via AP

State Trumpeters from the Band of the Household Cavalry performed a fanfare during the Service, written especially for the occasion by the Commanding Officer of the Bands of the Household Division, Lieutenant Colonel Darren Wolfendale.

Members of Nijmegen Company Grenadier Guards, of which The Duke of York is Colonel, lined the West Steps of St George’s Chapel as the couple depart after the Wedding ceremony. Pipers from the 2nd Battalion the Royal Regiment of Scotland performed Scottish pieces from the Garter Tower as the Bride and Groom depart in the Carriage Procession.

The Household Division's involvement in the Wedding also reflects Mr Brooksbank’s family history, as his great Grandfather, Sir Jack Coke, was an officer in the Scots Guards. Princess Eugenie of York and Mr Brooksbank have asked London based cake designer Sophie Cabot to make their wedding cake.

The red velvet and chocolate cake will be a traditional cake, with a modern feel. It will incorporate the rich colours of autumn in its design and will be covered with detailed sugar work including ivy.

Sophie Cabot started her bespoke cake design business in 2014 having grown up with a love of baking and learning her skills from her grandmother and mother.

Sophie came to the attention of the couple through her involvement with The Duke of York’s Pitch@Palace programme, where she supplied specially decorated bespoke biscuits.

The couple are delighted that Miss Cabot can be involved in the celebrations for their special day.

Originally a costume designer, Sophie’s artistic skills and flair come through in her creations, with a particular love for making sugar-flowers and using her hand-painting skills to create unique cakes.

Sophie Cabot said: “I am incredibly excited to be given this wonderful opportunity to create such a special and unique cake. It has been lovely working with Princess Eugenie and Jack and I really hope they enjoy the cake on the day.”