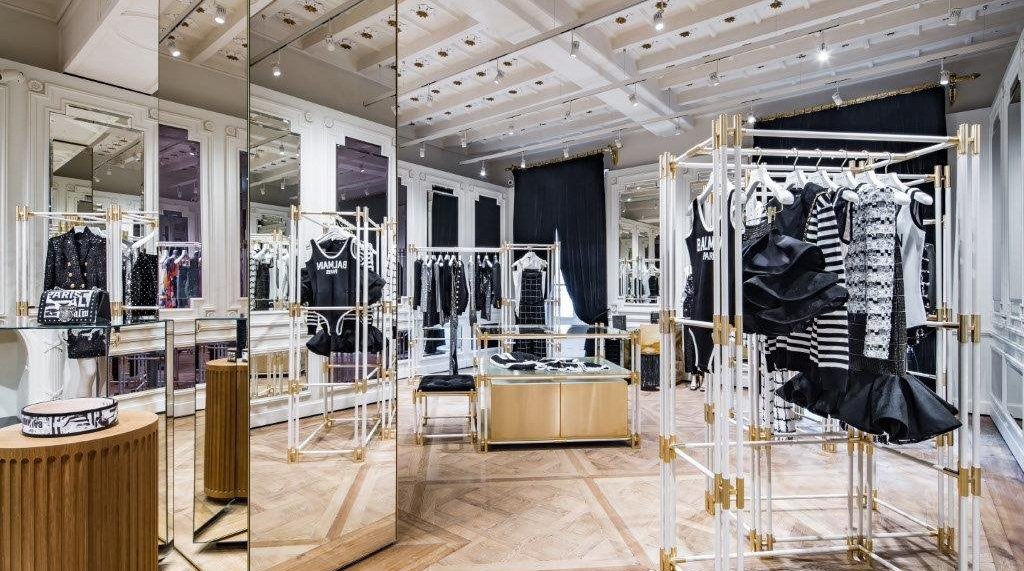 Balmain is pleased to announce the opening of its first Italian flagship. Set on Milan’s prestigious Via Montenapoleone, the 280-square-meter boutique sets out the brand’s women’s and accessories collections on two floors. The interior introduces a new store concept for the brand, conceived by Creative Director Olivier Rousteing and designed in partnership with the three young architects from Paris’ Studio AMV: Anna Philippou, Marie-Charlotte Prosperi-Fouchard and Victoire Guerlay.

“I was born and raised in Milan—but, the truth is, opening here has little to do with hometown pride,” explains Massimo Piombini, Balmain’s CEO. “Montenapoleone is one of the world’s iconic retail addresses—there are probably only five other locations in the world like this one—and after opening in SoHo, Mayfair and Melrose, this was the logical next step for Balmain.”

The Brief: A Clear Focus on Balmain Paris

Each Balmain address channels the unique history of the house and the new Milan boutique is no exception. The iconic original Paris flagship was revamped as a classic Parisian apartment for founder Pierre Balmain, London was designed to be M. Balmain’s would-have-been Mayfair pied-à-terre and both the Melrose and SoHo spaces were inspired by Villa Balmain, Pierre Balmain’s cliffside mid-century retreat on the Italian island of Elba. For Milan, Creative Director Olivier Rousteing directed the architects at Studio AMV to focus on the house’s Parisian roots. “Since this design will serve as a prototype for all future addresses, Olivier wanted the stress to be placed squarely on the second part of the house’s official name: Balmain Paris,” explained Anna Philippou of Studio AMV. “He made it clear to us that he wanted Balmain to transport Paris to all corners of the globe, to make each Balmain visitor feel the atmosphere of Paris, wherever they may be in the world. But he also ensured—at every step of the process—that this was done in a modern fresh way, that avoided all the expected clichés.”

Rousteing oversaw Studio AMV’s efforts to create the house’s new store concept. “Our brainstorming sessions took off from a consensus on the need to riff on classic Parisian residential architecture,” explains Rousteing. “From there, we ended up breaking down the codes of the hôtel particulier into ten particular elements, each of which was then associated with one key Balmain signature. Since I wanted the retail experience to stress experience, intimacy and discovery, we divided the space into a series of connected, distinct rooms, each inspired by the look of a living space (library, garden, boudoir, etc) and each dedicated to the display of one Balmain collection.”

The Choices: Classics, With A Modern Outlook

“In many ways, Milan’s interior echoes the guiding principles behind all of our Balmain collections,” explains Rousteing. “While each runway offering acknowledges and salutes the house’s singular heritage and impressive savoir-faire, my team and I always ensure that we are, above all, designing for how today’s generation lives and dresses. That same historic-modern duality can be spotted in the new prototype design for Milan. The parquet, moldings, chandeliers, curtains and mirrors all make clear references to classic elements—but we’re definitely not trying to create some sort of museum piece or dollhouse. Instead, what we’ve done is to play with each historical reference, making sure that designs are modern as well as elegantly crafted from the finest materials. This is a space where I know that the Balmain Army would definitely feel at home.”