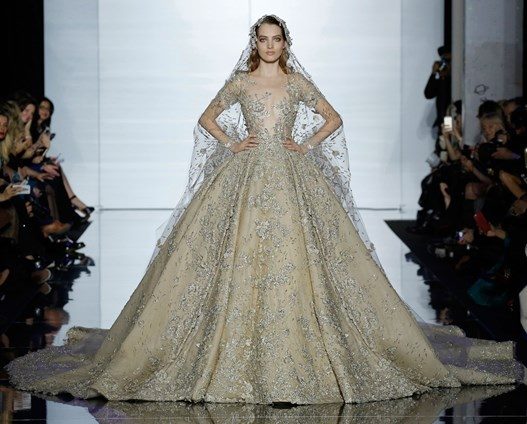 I think I’m in love.

Of course, I’m engaged, so that’s to be expected. But I have a confession: it’s not just my fiancé catching my eye at the moment. I’m also madly in love with Zuhair Murad, because he designed this: The Lebanese designer may not have the iconic status of design houses like Chanel or Versace yet, but he’s certainly well on his way, as he has become something of a closet staple among the young elite. His dresses have adorned the likes of Blake Lively, Sofia Vergara, and Miranda Kerr, and have graced the red carpet consistently, ever since his designs were catapulted onto the world stage by Miss France as she competed in the 2010 Miss Universe Pageant. Murad is still based in Beirut, but he has been a formidable presence on the runways of Italy and France since 1999 and 2001, respectively. Now, twenty years after the debut of his first atelier in Beirut, Murad has matured into a remarkably versatile designer. He cites as inspiration the four distinct seasons of his home country, and the archaeological histories of the countries that form the Mediterranean coast, from Egypt to Greece. His mission as a designer is to make his princes-inspired, goddess-worthy gowns accessible to women everywhere, and his designs project both an amazing imagination and a grounded awareness of what it means to be a woman around the world. Here’s an example of what I mean: Elegantly modest pieces are built into Murad’s bridal collections, which are informed by the needs of brides from a wide variety of cultural and religious backgrounds.

The dress I fell madly in love with— the one at the very top— is incredible. It embodies sexiness. It’s so sheer, it looks like it actually defies the laws of physics, and that is why I can’t get over Zuhair Murad. He’s not just a designer; he’s an architect, an engineer, and a magician, and I love that. I recognize that not everyone is looking for that in a designer, though. My mother, for one, would be horrified if I wore the dress in the first picture to my wedding. So would my extensive network of kin and family relations, who are overwhelmingly from conservative backgrounds (most are members of the Church of Jesus Christ of Latter-Day Saints, and a few have deep Southern Freewill Baptist roots). To them, a wedding dress should embody purity: it should cover the cleavage, the shoulders, and the back, and come no higher than the knees. If I were from an Orthodox Jewish or Muslim family, the modesty standards might be even stricter.

The two dresses pictured above show not only that Murad has range, but also sensitivity. Any woman looking for a wedding dress could find a suitable silhouette in his line. In fact, perusing the wedding dress selection on his website reveals that he has versatility in mind not only for his line as a whole, but for individual dresses. He designs blouses, jackets, and overskirts to complement the majority of his wedding gowns, so that even a bride looking for two different silhouettes (one for the ceremony, one for the reception) can simplify her search— not to mention her wardrobe change between events. Practical concerns aside, however, wedding dresses are meant to be the stuff of dreams. On her big day, a bride wants to feel like the best version of herself, whatever she envisions that to be. For a lot of brides, that vision includes luxury— which happens to be Murad’s calling card. His eye for detail, evident in every feature of his designs from the lush fabrics he chooses to his superbly delicate embroidery, seems to gives the women who wear his dresses a sense of grandeur and singularity, like they’re the most beautiful women in the world, right at that moment. I can’t speak for other brides, but that’s just how I’d like to feel on my wedding day. The quintessential wedding dress, presented as the climax of Zuhair Murad’s Spring 2015 Bridal collection— see it walk the runway in the video below: